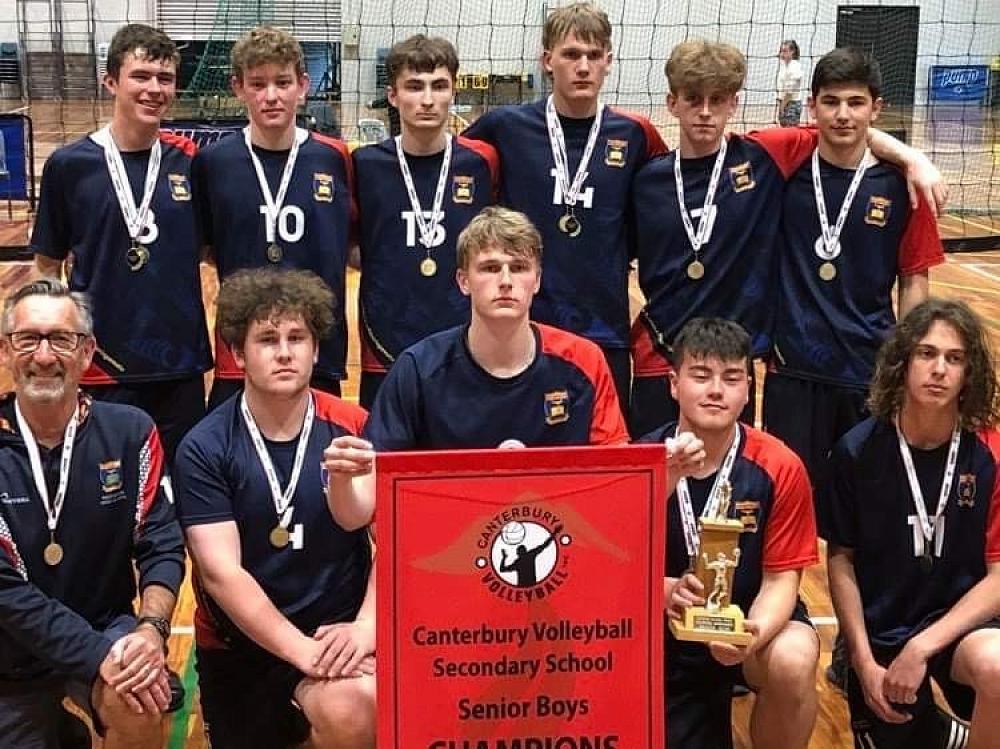 We came into this tournament as the number one seed from our Term 1 results.

Our preparation time was limited but we made the most of the opportunities we had with the team committing to training and many of them playing club volleyball over the winter.

In the week prior to the tournament we had a significant injury to the starting setter Spencer Lindsay, who sprained his thumb at practice.

We had enough depth in the team to re jig the positions at the start of the tournament and give him time to recover.

Day one was section play and first up was Christchurch Boys.

We steamrolled them in a quick 3-0 game.

Next was Middleton Grange, an up and coming team with students who played club volleyball over the winter.

We quickly got on top of them through sound defensive play to win 3-0.

Day 2 was against our own B team who put up a good battle but could compete with our fire power on attack.

Our last section game was against St Andrews.

Again our accuracy and all round game dominated them in the first set.

The battle was on in the second set, but composure and team patterns meant we stayed on top to romp away in the third set, winning 3-0.

We were back to our original starting setter, thumb braced and taped.

Complacency set in and we lost the 3rd 23-25 which allowed them back into the game.

We had a battle on our hands with the score see-sawing until we eventually won this 30-28.

This was a good reminder for us to play every point with commitment.

The final was against Shirley Boys, a team we have often met in finals and have a strong camaraderie with.

This was the best game of the tournament, two teams defending to make amazing pickups and transitioning to powerful spikes.

We got an early jump in the score through some smart accurate serving and held them off 25-20.

The second set was a rollercoaster and our emotional stability and defence held us up to win it 28-26.

We had learnt our lesson about complacency in the 3rd set in our semi-final so fought for every point throwing our bodies into the floor.

A complete team effort over the tournament and build up to it is what contributed to this.

Many thanks to the Riccarton students, both current and ex, who came down to support.